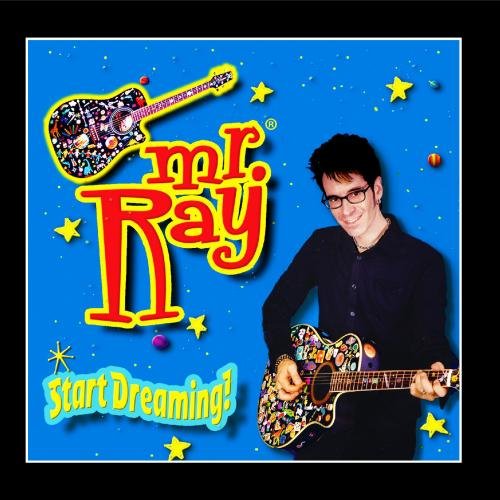 When sold by Amazon.com, this product will be manufactured on demand using CD-R recordable media. Amazon.com's standard return policy will apply.

Mr. Ray doesn't mess around with warm, fuzzy renditions of classic kiddie tunes, even though the crowds he aims to please are still in the lower single-digit age bracket. Instead, as his black, sticker-emblazoned guitar and groovy Elvis Costello glasses hint, he's built a reputation on revving up the little ones with kicky, bounce-around pop/rock numbers, a 12-song clutch of which is represented on Start Dreaming. These tunes sail along, some unloading simple messages that any preschooler can relate to ("Boo-Boos Go Away," "When I Grow Up") and others dipping into more didactic, imagination-inflating waters ("Roy G. Biv," about a boy whose name is an acronym for the colors of the rainbow and "Why Are There So Many Questions," an invitation to stare down such head-scratchers as who thought it would be a good idea to put feet in shoes and how so many spots get on cows). All stand solidly on suck-you-in hooks and melodies--something not entirely surprising from a musician who's brought acclaim to his own grown-up bands, including Stone Pony and Blue Van Gogh, and toured with Meat Loaf and matchbox twenty. If that's not reason enough to take notice of Mr. Ray, his label might be: Start Dreaming is the first in a new family series from Sugar Beats Entertainment, home of irresistible kids' rock band, the Sugar Beats. This debut will keep musically with-it kids crossing their fingers that label head and Sugar Beats' creator Sherry Kondor, also daughter of Carole King, will start dreaming up her label's next pop pick-me-up pronto. --Tammy La Gorce

mr. RAY (Ray Andersen) grew up in the house that legendary songwriters, Carole King and Gerry Goffin lived in...

It all began when his Dad told the family that they'd be moving into the former home of the legendary singer/songwriters, in West Orange, New Jersey. It is the house where Carole King wrote most of Tapestry, and she and Gerry Goffin wrote the hit song, Pleasant Valley Sunday, for the Monkees. Pleasant Valley Way runs right through West Orange and the song's lyrics summarize suburban life, and mentions neighbors on mr. RAY's street. Upon an older cousin turning him onto the Beatles, and discovering from there the beauty of great songwriting, Ray was inspired at a very early age to attempt playing the piano, guitar and drums, and start crafting his own songs-without a single lesson.

Besides having his Rock and Roll idols and inspirations, Ray was always attracted to the zaniness of TV/movie personalities amp; entertainers like Danny Kaye, Jerry Lewis, Monty Python, Dick Van Dyke, etc. Ray describes it as, "...keeping one foot in childhood, and one foot in the grown-up world... it's a delicate balance." Seeing these personalities prompted Ray to start acting in local productions and studying at New York City's famed, American Academy of Dramatic Arts.

In the early 80s, he was a member of the notable Asbury Park NJ, Stone Pony house-band, Cats On A Smooth Surface. Bruce Springsteen played with Ray and the band so much, he often raved to the press worldwide, that they were his favorite group of musicians to jam with when he was off tour.

In 1995, Ray and his wife, Patti Maloney, formed a pop/rock duo, Blue Van Gogh, and they released an album called Hi-Fi Junkie Sonata and video to international acclaim. They toured throughout Germany as the opening act for matchbox twenty in April of 1998.

Later that year, 1998, Ray got a call to play guitar, keyboards amp; sing backup for international rock star, Meat Loaf. Besides giving him the thrill of performing in some of America amp; Europe's greatest venues, Ray, as part of Meat Loaf's band, did a lot of TV such as David Letterman, Jay Leno, Top Of The Pops, TGIF, VH1's Storytellers, Hard Rock Live and many more. In October of 1999, the #1-rated VH1 Storyteller episode of all time, Meat Loaf's, went on the road through 2000, amp; Ray along with Mr. Loaf can be seen forever preserved on the Storytellers DVD and CD.

Throughout all of this, of course, mr. RAY was entering into a new musical galaxy where his critics were a lot tougher...even if they were under the age of 8! But Ray knew how to get through to them with his music amp; friendly antics. In 1994, his wife, who was part-timing at a pre-school, asked Ray to come in and perform some songs for the kids. In no time, he became known as "mr. RAY," clad in his trademark black glasses, holding an eye-catching, colorfully-stickered guitar. The kids were quickly hooked. Singing about friendship, dinosaurs and rainbows never sounded so cool before...It was such a success that parents everywhere started begging him to record these songs for those long car rides. mr. RAY wrote and co-produced his own album entitled, START DREAMING! It was released in April 2001.

He then signed with Sugar Beats Entertainment (a company owned by Carole King's daughter!) to distribute his album nationwide. In March 2003, mr. RAY (no longer Ray Andersen!) signed a DVD/Video deal with a Philadelphia-based company, Center City Film amp; Video. Live footage intertwined with animation based on his songs is featured. He's been featured in Parenting Magazine, Family Fun amp; the New York Times, amp; many more. The Wall Street Journal profiled him on the front of one of their Marketplace section, with a color photo, as well.

In 2005 he was on AMC's reality-based series, Into Character, where he portrayed (as himself) a rock guitar instructor on the La Bamba episode.

mr. RAY has also appeared on QVC and sold his DVD and Start Dreaming CD. mr. RAY's second album, Songs From The Kids' Lounge was released in October 2004. The third mr. RAY album, Family Ride was released November 2006. Starting December 6th 2006, the first-ever mr. RAY commercial aired on NICKELODEON amp; CARTOON NETWORK in the US, selling the brand-new DVD, "Songs From The Stickered Guitar" It features 5 new animated original songs. He is represented in the UK by Cool Kids Music and will be performing dates in May 2007. Mr. RAY has the following he also dreamt of - he just never thought they'd be under 8 years old! Not true - families are always seen singing and dancing together at all of his live sows. He calls what he does: MUSIC FOR THE KID IN ALL OF US. Ray and his wife, Patti, live in New Jersey USA, and are the parents of a beautiful girl they adopted from birth...they named her Layla.

Learn how the macroscopic world can be explained from the molecular level and let your natural curiosity shine in the Department of Chemistry, home to innovative research and fully-equipped laboratories with state-of-the-art tools. Chemistry deals with the fundamental building blocks of life and the inanimate materials we encounter daily. Collaborate and learn to think critically with scientists from all fields as you study “the central science”.

Choose from one of five specializations.

The Undergraduate Science Centre (USC) is the home of all undergraduate student support in the Faculty of Science: Science student advising, program coordination, the Science Internship Program, Science Engagement programs and student events. Resources, support, and advising are all provided remotely.

As part of a recent reorganization within the Faculty of Science,. the Graduate Science Centre has been created for graduate student support and services.   View current graduate programs, important dates/deadlines, forms and documents, and and contact information for your questions.

Chemists develop new materials for sustainable energy, new therapeutics for the treatment of disease, better ways of understanding polymer reactions, more accurate approaches to measuring pollutants and more. See what our researchers are working on.

Connect to the Faculty of Science

Faculty of Science at Beakerhead

The Faculty of Science is committed to sharing the awe and wonder of science with our local community and beyond. Science is discovery, science is exciting, and science is for everyone. There is no better way to engage in science than by having fun with it.