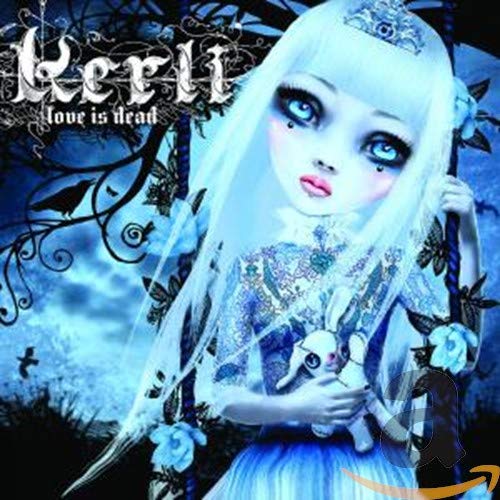 All you need to know about 21-year-old singer-songwriter Kerli is contained in the songs to her debut Island Def Jam album, Love Is Dead.

Born in Elva, Estonia, a tiny, then-Soviet occupied town of 5,000 people in the forest, Kerli grew up with a dream to escape from her surroundings. "Little creepy girl/Oh she loves to sing/She has a little gift-an amazing thing," she declares on the autobiographical, world music beat of "Walking on Air. "She will go and set the world on fire/Nobody ever thought she could do that."

"I'm a passionate person," declares the blonde-haired beauty, who once drew a picture in a diary when she was 13 that depicted her going to America. "Where I come from, it was a shame to show your emotions. You could never be too happy, because something bad might happen. I was always a passionate person. I wanted to live every moment. I looked around me, and it was beautiful, but I wanted something more."

Ignoring material comforts and new clothes for lessons in singing, ballet, acting and classical piano, at fourteen Kerli entered and won Euroalaul, an annual televised competition to select a song to represent Estonia in the Eurovision Song Contest. After the win, she decided to concentrate on singing. Island Def Jam Chairman Antonio "L.A." Reid signed her on the spot after she auditioned for him.

Working with noted producer/mixer/songwriter David Maurice, whose credits include Garbage and JC Chasez, Kerli wrote the personal lyrics to all the songs, reflecting her amazing odyssey from a small town in Estonia across the sea from Scandanavia to major label recording artist.

"Being here has enabled me to grow as a person," she says. "What I like here, which I never had in Estonia, is that people really do believe they can become whatever they want to become. My background has made me what I am, but it must be so much better to grow up in an environment where nobody tells you that you can't do something. My dream of leaving and making music was my escape. I had no other options."

That resolve comes across in songs like the rocking "I Want Nothing" and the vulnerability mixed with bravado of "Bulletproof," while the hope of a better future comes across in the soulful Ramp;B of "Beautiful Day" and the emotional moving "Butterfly Cry," in which she reveals, "I used to believe there was no lights/But I found out/Life is far too short to fight/Lose yourself/Let go your pain/Taste the air you breathe/And kiss the sky."

"I used to be suicidal and depressed when I was younger," she says. " `Butterfly Cry' is about getting out of that. It was like my eyes were suddenly opened. It was a rebirth."

That cycle of death and resurrection runs throughout Kerli's dark-laced songs, from the title track, to the techno-rocking "Hurt Me," a reflection of the mental abuse she suffered as a youngster, and the defiant harmonies of "Fragile," marking the distance between where she came from and where she is now.

"It was hard for me to go back to my normal life in Estonia when I first started traveling," she says of the inspiration for "Fragile." "I felt like I didn't really fit anymore. None of my family or friends could relate to what I was going through, and I couldn't relate to what they were going through."

She claims no musical influences, except for being a fan of Bjork. Kerli insists: "I'm just such a sponge that whenever I hear something beautiful, it touches me. When I was little, we didn't have much access to western culture. I remember my cousin getting cable when she was five and it was the first time we'd ever seen MTV."

And while Kerli has certainly made up for that lost time, she is adamant that pop stardom, fame and material success are not her goals, which she declares in the reggae rhythms of "Up Up Up" or the confessional "I Want Nothing."

"I used to fantasize about being a pop star, but now my passion is for music," she says. "I don't care about attention. I just want people to hear this record. It's not about me. Everything I do at this point is for the people and the hope somebody can relate to what I went through."

"You think I'm more than you," she sings in "Fragile. "You think you see me/You like the way I'm strong and stand by you/But I am fragile, too."

"I haven't had a single dream that hasn't come true," says Kerli of her remarkable path, which has led her to L.A. and N.Y. to record her debut. "The bigger the dream, the more time it takes to come true. The moment you really let go, that's when something comes to you. The next level for me is to be totally untouchable. My dreams now are very spiritual, of personal growth. All I want is to be happy. I want to make love my armor so that nothing can hurt me."

Love Is Dead is the next step in that voyage, which has taken her from a tiny village on the other side of the world to an opportunity to tell that story so that it inspires others.

"World's turning round for you/There is no need to be afraid...Everything is on its way."

"This is the way I feel all the time," she says. "I open my eyes in the morning and I'm excited about my life. But I want to keep that darker part alive, too, because I find it very beautiful. I just want to show people that it is possible to come out of that dark hole. I was as deep as you can get, but I came out. Everybody can. There is a light at the end of the tunnel. That's my message. I'm a storyteller, a messenger, a friend, a helper on a very basic, simple, human level. I'm a voice for the outsiders, because I'm one, too."

"Life is my creation/My best friend," she sings in "The Creationist" of the way she has invented and then transformed herself and her life. "Whatever happened/Was meant that way."

On Love Is Dead, Kerli is ready to share her amazing journey with the rest of the world.

Recent posts tackling problems in all areas of life

Think Getting Old Sucks? Here’s Why Aging Doesn’t Have to Suck